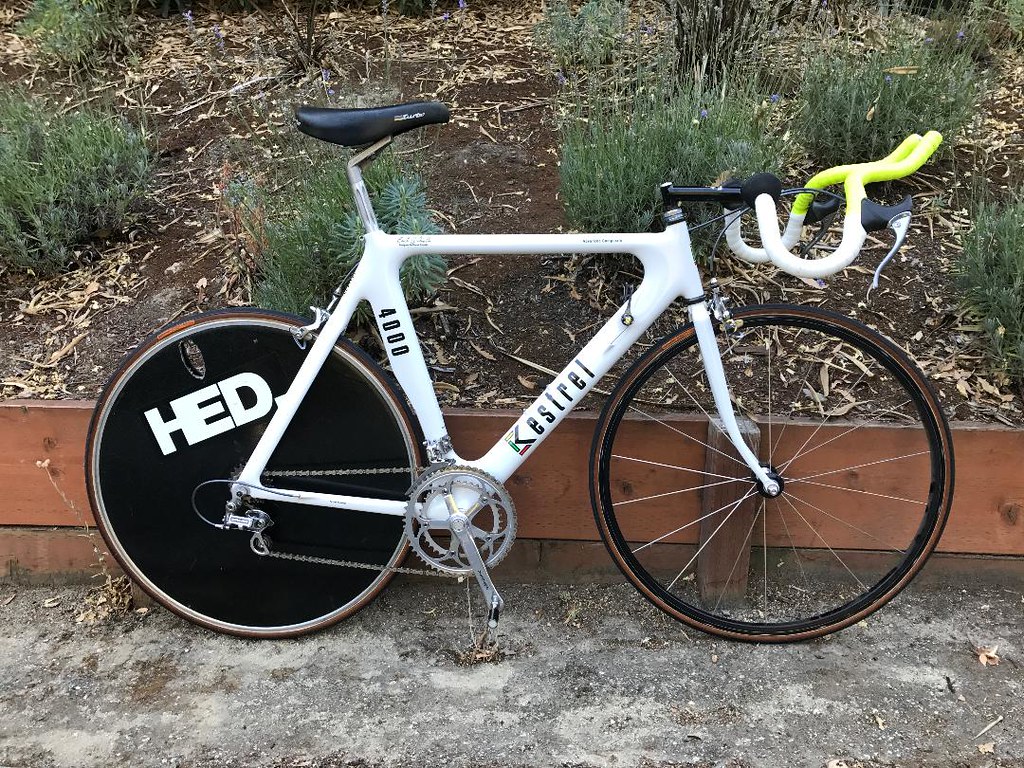 These days we hear a lot about companies that are "disruptive" - they reimagine and reinvent how things have been traditionally done. Companies like Uber, Amazon and Tesla come to mind.

Going back in time, over 30 years ago, the cycling industry experienced a period of disruption as well. In 1986, things were a lot different from now. That year, the #1 Billboard song was "That's what friends are for" - do you even remember it? Were you even born? That year, the Space Shuttle Challenger disaster also occurred. Magnum, P.I. was the top rated TV show.  And bikes were almost universally made from steel tubes, butted (welded) together with lugs, the same way it had been done for decade. The frames had round, non-aerodynamic tubes and they typically weighed a portly 4 1/2 to 5 pounds or more.

But some amazing things also happened in 1986.

This bike, an original Kestrel 4000, comes to Roadbikereview by way of a collector who really appreciates the history of innovation with cycling. The owner has put together a nearly mint condition masterpiece that showcases the technology of the time. The frame, the handlebars, the wheels, the indexed shifting – all are the basis of what is state-of-the-art today.  The bike is beautiful, and could still be considered a “daily driver”. This is miraculous, especially if you consider the bike is over 30 years old.

The Kestrel 4000 was way ahead of its time. It was the first offering of Cycle Composites, Inc - CCI was launched by Trek founder Bevil Hogg and Tom French in order to commercialize Brent Trimble’s designs. It was the world's first all carbon fiber production bike -- other carbon bikes did exist but they used round tubes and lugs - merely iterating on the existing steel tube and lugged construction. The Kestrel was the first bike to use carbon throughout, joinery included. It featured a revolutionary monocoque frame (meaning, a molded, single piece), aerodynamic shaping (also a first), and, internal cable routing. Incredibly the frame was nearly 40% lighter than typical steel frames coming in around 3 1/2 pounds (just over 1600 grams) which was unheard of for its day.

This bike has been built up as the “ultimate triathlon bike for the 1987 season”, featuring  highly innovative components that were first made available for that year, including:

I was lucky to get to ride this showcase of a bygone era. After getting fitted, I was surprised at how comfortable and stable the bike felt. The SIS shifting was remarkable as the shifts seemed to fire like a gun shot from one gear to the next--absolutely precise, though reaching down to the down tube to shift disrupted smooth TT cycling efforts. The front wheel was remarkable; heading out on a windy straight road, the front end had no twitchiness despite the strong cross winds I encountered. The frame felt solid and there is no noticeable flex even under hard acceleration. I even clocked my second best Strava time for one rolling uphill segment of my favorite TT course that I have done countless times. This said, the road feedback was a bit dull and "wooden" feeling which is understandable since this was such an early design/experiment with carbon fiber; there isn't a lot of tactile feedback from the road surface. The super low and long stem had me stretched out and past my flexibility limits; raising the stem helped to alleviate that feeling though I still would have been more comfortable with a much shorter stem. But on flat roads, the bike rode rock-solid; no wonder it was so popular on the Ironman triathlon circuit back in the day. Other quibbles - braking is a bit problematic as the rear wheel has some play to it requiring brakes to be set wide so the wheel doesn't rub - but that doesn't mean the brakes aren't effective.  The gearing was also too low for me; I've grown accustomed to rear gearing of 11-26 and the 12-21 that it had made it harder to keep cadence up, requiring a downshift to the small ring, especially on rolling hills.

This bike was truly revolutionary back in the day -- and it is still impressive. It set the stage for what could be done with the miracle material, carbon fiber. The remarkable light weight, aerodynamic tubing and internally routed cables were far ahead of the time. It was a pleasure to ride this bit of cycling history!

For more information, check out this Kestrel tech talk that was given at Google or see what Kestrel is up to now.